The Queen, her Beast and the Creature…

Barnes and Noble on Nook

On Lulu for most eReaders

iTunes, the Apple Mac store for most Mac Devices

On Google Play for most eReaders

And finally on Kobo for most eReader devices

SandSPublishing – discounted for eReaders only

An Unusual Love Story Awaits You…

Read it, if you Dare!

Its 30,000BC, the weather is hot and very sultry, a sign of approaching global change.   There is a strong breeze in the air signifying an approaching storm, yet she doesn’t care.

She is running as fast as she can along the golden sands beside the edge of an ancient sea.   She is scared, very scared; she had never seen its like before.   It isn’t animal and it isn’t plant; all she is aware of, is the foul smell and the pus-like fluid oozing from its many pores.   She screams for help, she is so close to her village, yet this thing is gaining on her. She knows her death is imminent and tears flow down her pink soft cheeks.   She senses a sting on the back of her neck and feels an intense pain shooting down her spine through her hips down to her very toes.   She convulses but still running she knows her end is nigh.   She begins to vomit up all she has in her stomach and her lungs begin to sear with excruciating pain.   She slows as paralysis sets in. Its slimy sucker-like tentacles grab at her back and slowly she feels herself being dragged backwards into its foul smelling embrace.   Her screams are of a dying woman so desperate and with such fear she succumbs to its deathly foul smelling touch. 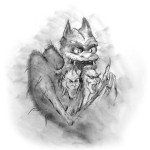 She feels it enter her, a sharp and painful thrust up into her groin and she slowly feels her insides being sucked out through the gurgling, slurping tentacle-like tube that has penetrated her.   As she fades, screaming her way to eternity, she senses this thing is pleasuring itself on her very life force and that was her last thought before oblivion. Its final blow smashed through her eye and drained her grey matter through its tentacle, sucking it into its very being.   All that was left of her was a skin sack emptied of all content. Satisfied with the kill, it looked up and with a cry of conquest, it vibrated a melodious tune that attracted many of its kind to begin their savage consumption of the villagers just beyond the rise. The attack on the village was equally brutal.   No one survived, no child, no dogs, not even plant life, all were ingested by these foul creatures of a bygone era.   All that was left were empty husks of mammal and plant remains.

This book is hot, sensual with an abundance of weirdness that will take your imagination to places it’s never been before. This unusual love story is about two people unexpectedly meeting and discovering a deep connection of desire and friendship. They decide to go hiking and spend the night making love in the wilderness when they discover there is more to them than meets the eye. Both have disturbed dreams of animal-like creatures, both have experienced desires of savagery. Their act of love making kick starts their evolutionary change and a quest to discover who and what they are. This action packed thriller has all the hallmarks of suspense and desire that will keep you reading to the end, an end that is just the beginning. This book is available in paperback as well as on most eReaders.   Purchase this book at any of the fine retailers.